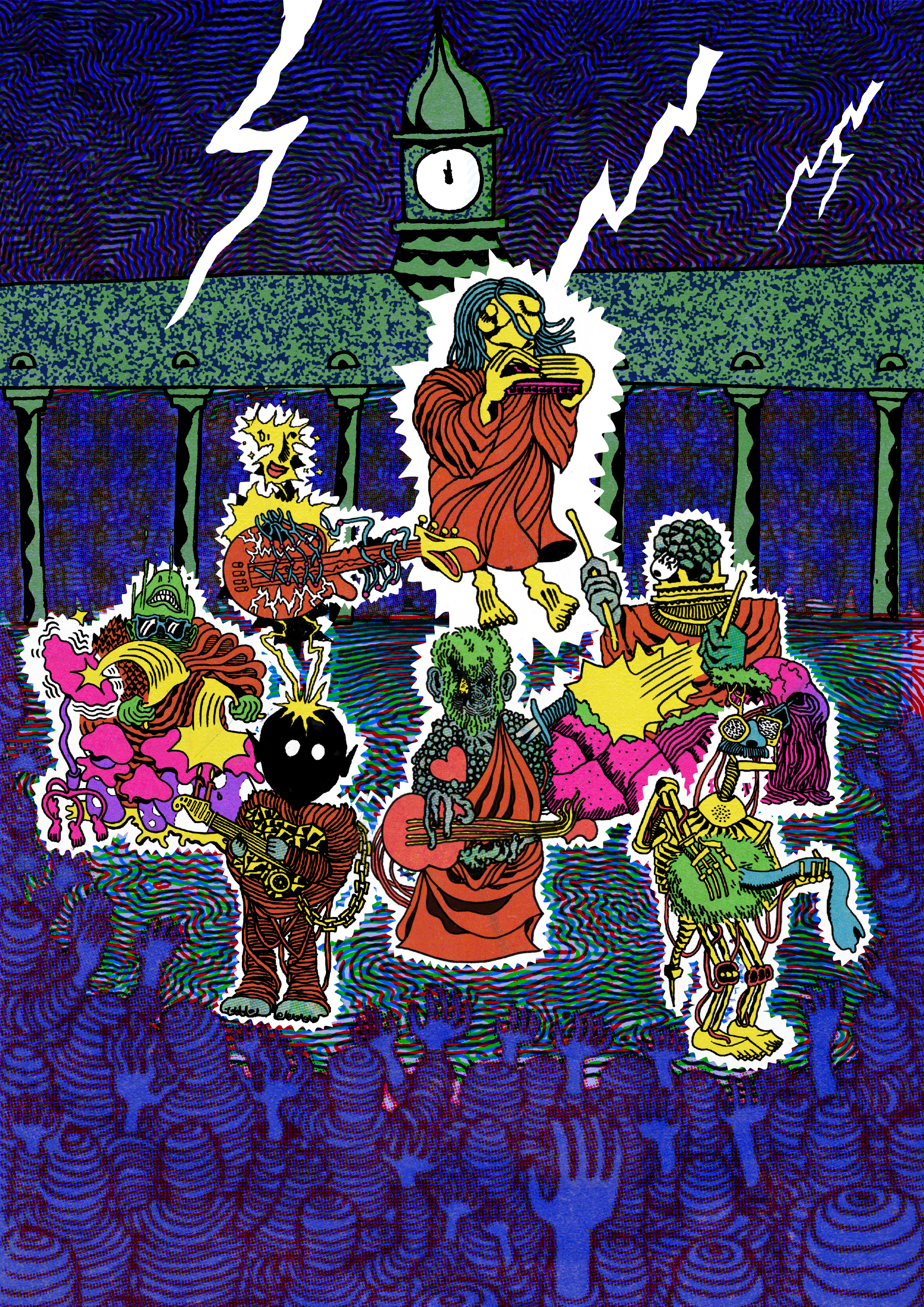 It’s been a long hot day. Outside of King Gizzard & the Lizard Wizard’s core contingent of Gizzheads, the crowd’s energy is all but spent. This is not the result of a lack of enthusiasm for the band or their music, simply a grim consequence of a day spent in the scorching heat of Australia’s steamiest of summer festivals. Humidity has rung every inch of energy from those present. There’s also a sense of disappointment that hangs upon the air. Another of the festival’s headliners, The 1975, has canceled and Gizzard have been forced to take their place at the festival’s main stage.

It’s going to take something special to get this crowd started.

With their work cut out for them, King Gizzard kick off with ‘Mars For The Rich’. Along with follow up ‘Organ Farmer’ it doesn’t seem capable of cutting through the thick heat. Fortunately, Gizzard are only warming up. ‘The River’ meets a more welcome reception and as the band burst into ‘Crumbling Castle’ a ripple of recognition courses throughout the crowd. As it does the docile audience erupts.

Seeing Gizzard in Festival Mode is different to witnessing them in the environment of one of their own shows. This isn’t one of three-hour marathon sets the band will soon be lavishing upon their rabid American following at Red Rocks and The Greek Theatre. With strictly one hour to work their magic, Gizzard’s set plays out shorter and more concise. Absent are the riff jumping jams and monster medleys of recent albums Live In Adelaide, Live In Brussels and Live In Paris. The band isn’t here tonight to pull every move in the Gizzard playbook, just to give their audience a taste of it.

As the night continues the band sails between thrash, jazz, blues, prog and frenzied garage with effortless ease. ‘Wah Wah’ arrives as an early crowd favorite and from here the momentum only builds. For ‘Let Me Mend The Past’ from Float Along – Fill Your Lungs Ambrose Kenny Smith replaces Stu McKenzie as bandleader. As he does, he serenades the audience before boldly climbing amongst them. Joey Walker follows suit performing ‘This Thing’ before Stu resumes vocals for ‘Planet B’ and ‘Self-Immolate’, which finally hurls the crowd into motion.

Gizzard continue to hit their stride. Wild, weird and wonderful, the electricity catches. Crowd surfers eject themselves from masses of flailing limbs and water cannons explode overhead. The disappointment which previously sat heavy upon the air is replaced by the sweet and pungent smell of pot as King Gizzard jam on ‘I’m In Your Mind’. Stu, who now doesn’t want to leave, begs the sound technician for three more minutes. The crowd joins him. While it looks like it might not come to pass, his wish is granted and Gizzard breaks into ‘Cellophane’. Amidst wild cheers, the band makes their exit.

While many dissolves into the humid entropy of a stifling night several dozen King Gizzard Remainers scream for more. The request is not granted. Which, once again through no fault on the band’s part, is a shame. Outside of the senses of all but the most dazed and confused of Gizzard’s following, dancing cyborgs did not flood the festival grounds and neither did Nonagon Sages descend from the heavens to drive gleaming gamma knives through the audience’s doors of perception. Tonight, the Gizzverse was not confirmed but neither then was it denied (or for that matter murdered, as it one day will be). To put this sentiment into plainer English, it feels like this band was only getting started.