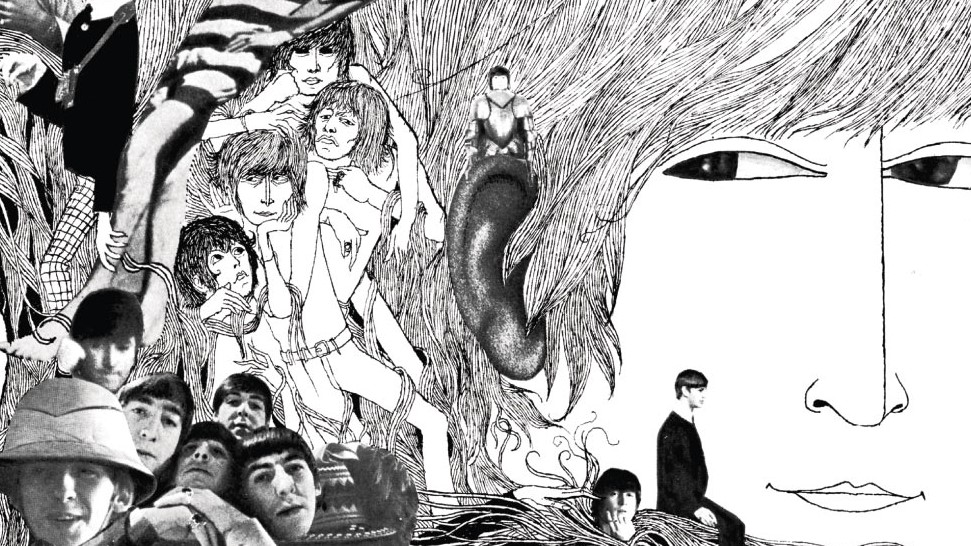 The Beatles’ Revolver At 54

By the end of 1965, The Beatles were disillusioned.

They were sick of performing live.

“We couldn’t hear ourselves when we were live,” Paul McCartney would later recount, “there was so much screaming.”

Beset by manic fans on all sides, the band had come to see the recording studio as a sanctuary.

Cloistered within Abbey Road, The Beatles could dedicate themselves to their true passion, making music.

These increasingly elaborate artistic visions were fast outstripping the band’s abilities on stage.

During The Beatles’ final 1966 World Tour, the four struggled to recreate the harmonies of Rubber Soul’s ‘Nowhere Man’.

Recorded the same month the group made their final public concert, ‘Eleanor Rigby’ could never satisfactorily be recreated onstage.

Revolver was a new phase.

It was something else entirely.

The Beatles were no longer making songs.

They were making records.

For three months at the beginning of 1966, each Beatle took time off to relax and enjoy the sweet smell of success.

For what felt like the first time in years they found themselves relieved from the high-pressure world of touring and recording hits.

Paul McCartney was holed up in the London home of girlfriend Jane Asher and it was there in the basement where he wrote ‘Eleanor Rigby‘ on the family’s upright piano.

The lyrics for ‘Here, There and Everywhere’ and ‘For No One’ also came as fruits of that, by now, troubled relationship.

Outside of the Asher household, McCartney was socializing with London’s artistic fraternity.

Inspired by the cut-up poetry of William Burroughs and the works of avant-garde composer John Cage, McCartney experimented with tapes, later using the results of his backward recordings on ‘Tomorrow Never Knows’.

With the Beatles yet to come under the scrutiny of British authorities, he would also write ‘Got To Get You Into My Life’ about his blossoming love of marijuana.

In sharp contrast to the cosmopolitan McCartney, John Lennon had settled into domestic life at his Weybridge Estate.

Lazing around a large house in the leafy suburbs, Lennon tinkered with a recently acquired mellotron.

He was also increasing his acid intake, a move that prompted him to set many of his drug experiences to song.

The character in the song ‘Doctor Robert’ was based on a known celebrity drug supplier of the time.

‘She Said, She Said’ focused on a conversation Lennon had with Hollywood film star Peter Fonda, who told the Beatle “he knew what it was like to be dead” while both were on LSD.

Returning to Weybridge he immediately delved into Leary’s book.

Dropping acid in the prescribed manner, John was struck by one of the book’s leading phrases.

“Turn off your mind relax and float down stream.”

Yet to meet Yoko Ono, John would later disparagingly describe his time at Weybridge as his ‘Fat Elvis’ period.

Yet if John was lingering in a state of spiritual malaise, George Harrison could not have been more inspired.

Spurred on by a newfound passion for sitar playing, Harrison was beginning to explore Indian spirituality.

His personal revelations manifested in the first of his three Revolver contributions ‘Love You Too’.

With the quality Lennon and McCartney songs increasing so dramatically, Harrison’s emergence as a songwriter added to the creative momentum of The Beatles.

Past delivering vocals on ‘Yellow Submarine’, Ringo Starr did not contribute any original songs.

Having started a new family with wife Maureen Cox the previous September, Starr was happy to take a back seat.

He was, no more or less, what he had never claimed more to be: The Drummer.

If there is a 5th Beatle in the Revolver story it would be George Martin.

Working with the band since debut single ‘Love Me Do’, Martin’s creative ambition had grown in step with the Beatles own.

He had greatly assisted the group in translating their abstract artistic notions into practical, technical, and musical terms on Rubber Soul and would continue to do so on Revolver.

Martin, however, also had other things upon his mind.

Having left his role as an in-house producer at the Beatles record label EMI, he was now the owner of Air Studios.

In addition to working for the Beatles as an independent producer, Martin was also looking for new artists and business opportunities.

And so, to assist in capturing the wild ambitions of an increasingly creative Beatles, Martin was behind the promotion of 20-year-old Abbey Road tape operator Geoff Emerick to engineer.

It is Emerick who can take credit for many of the album’s groundbreaking special effects.

“A lot of the sounds I heard in my head were dark,” Emerick later shared of the sessions. “And with Revolver, it was more about making things sound different than reality.”

He hit the ground running at Revolver’s first recording session on April 6th, 1966.

Having returned to Abbey Road for the first time since the release of Rubber Soul, The Beatles worked in earnest, beginning with the recording of  ‘Tomorrow Never Knows’.

For the song, Lennon informed George Martin he wanted his vocals to sound like a thousand monks chanting from a mountain, an “echoing down windy canyons” effect.

To achieve this Lennon expressed the desire to be suspended in a harness and swung in a circle around a stationary microphone.

Geoff Emerick would instead satisfy John’s request by breaking into the circuitry of a revolving Leslie Speaker and recording Lennon’s vocals as they came out.

When John wanted an “underwater” vocal for ‘Yellow Submarine’ Emerick dipped a condom covered microphone into a bottle of water.

The Beatles were not just open to new sonic ideas but to working more collaboratively as well.

French horn player Alan Civil, who performed on Paul McCartney’s ‘For No One’, became the first non-Beatle musician to be credited on an album sleeve.

In addition to Civil‘s playing, a brass ensemble was used for ‘Got To Get You Into My Life’.

Folk singer Donovan would contribute lyrics to ‘Yellow Submarine’ and Rolling Stone Brian Jones, alongside an ensemble cast of Sixties personalities, assisted with the song’s recording.

Revolver reflected a newfound sense of inclusiveness, the “all together now” attitude of Flower Power mentality.

With the album nearing completion, graphic artist Klaus Voorman, a friend of the group from the early days in Hamburg, received a call from John Lennon.

Lennon’s request was simple, he wanted an album cover.

Invited to a recording session Voorman was astounded by The Beatles’ new direction.

Spurred on by Ringo Starr’s hypnotic drumming on ‘Tomorrow Never Knows’ he was inspired to create a pen and ink drawing of the band.

Adding to the sketch with a photographic collage, Revolver’s cover was complete.

Each of The Beatles’ records was a turning point.

From Lennon’s torn vocals on ‘Twist And Shout’ to Rubber Soul’s French chanson ‘Michelle’, every album altered the face and future of popular music.

Revolver, however, was different.

Without a weak track, each song delightfully inhabited its own artistic universe.

It was a groundbreaking moment in rock, a high watermark of songcraft and experimentation.

In the ears of the millions who have listened since its sonic possibilities have yet to be exhausted.

But for The Beatles, it was business as usual.

No sooner was Revolver finished were they onwards and upwards to the next challenge.