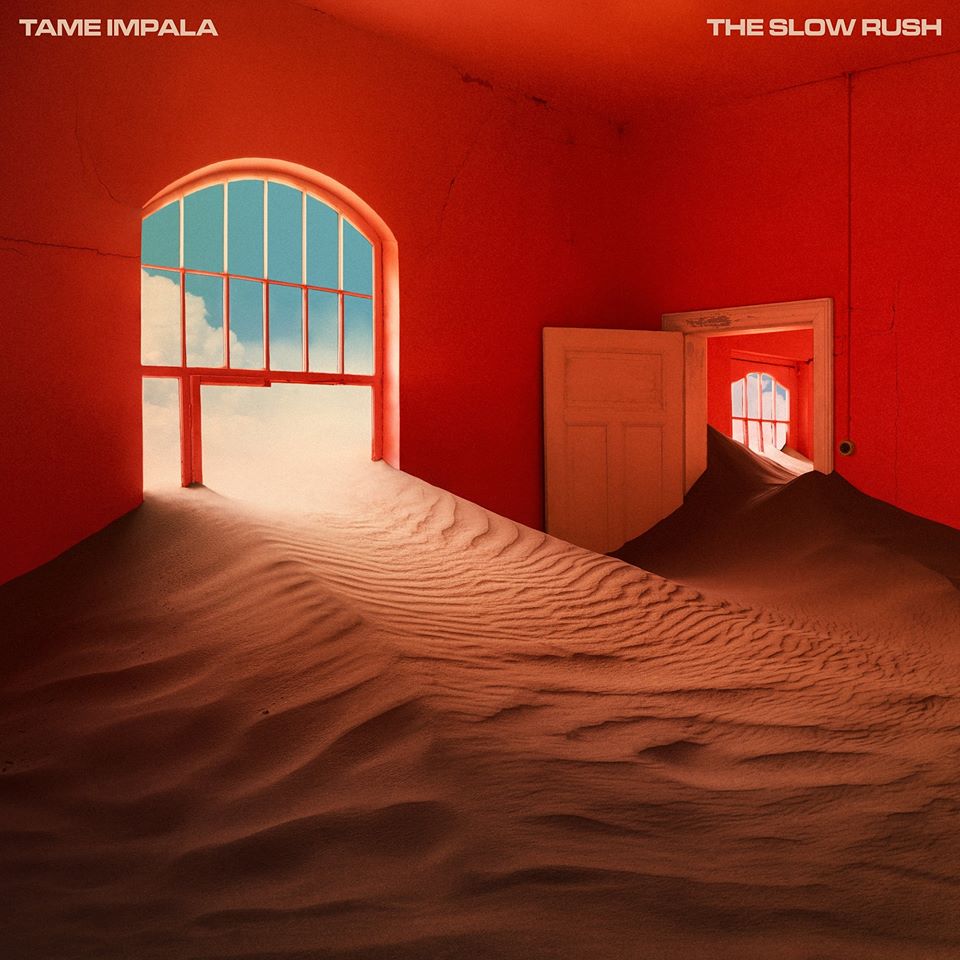 Dread. Anticipation. A curling feeling in my stomach that even if the world may not be entirely changed by this album, neither will it ever be the same.  I think this to myself as I circle the aisles at the record store, pretending I have some other reason to be there besides picking up a copy of the new Tame Impala album.

Then, it catches my eye. Blue sky through a window and a red room from some far-off place leaking with desert sand.  I make my move.

The clerk at the counter is indifferent. Just another record, just another customer. Almost guiltily I pay for the record, take the record from the counter and leave. Noisy plastic crinkles under my arm and I shuffle toward my car. I lay the record in the seat beside me and turn on the radio.

Sun washes across my face. I pull on to the road and there I sit in traffic. There is nothing on the radio. I settle on Paul McCartney’s ‘Maybe I’m Amazed’.

Home, I tear open a layer of shrink-wrap only to find another.  I rip that away too, a blue cover slips from the red one. Then slides the vinyl itself. ‘TAME IMPALA’ it reads, ‘THE SLOW RUSH A’.

Currents started with an emotional tempest. The Slow Rush kicks off floating on a whim. ‘One More Year’ jumps to life from airy headspace, one where Kevin Parker’s creative ambition runs wild. I am hit with the realization that Kevin Parker has changed. The world has changed. This new reality is not as comforting as yesterday. It’s hard to even say if I like the thing. Suddenly, I’m nervous.

“So often,” author John Steinbeck wrote in East of Eden, “men trip by being in a rush.”  There’s no way of getting around saying this. My first impression of Side A is that it falls flat. Neither ‘One More Year’ nor ‘Instant Destiny’ knock me over.  The Slow Rush starts in the unfamiliar musical terrain and I can’t shake the feeling that Parker has tried to cast his mastery over newer musical forms in a way I can’t connect with.

Even ‘Borderline’, one of Tame Impala’s most confessional and surprisingly catchy numbers, arrives as a “Why the heck did he do that moment?” The bass heavy rework is still good, but I loved the drift and lighter tone of the original. Kevin swirls on an upward spiral and at times I feel like I’m not entirely with him.

I flip the record. Side B makes me feel something. This is it. The depths of Parker’s pathos, venom and hubris come to bear on ‘Posthumous Forgiveness’. You can romanticize it all you want, but vulnerability is an ugly thing.  Before the album arrived a lot of people talked about this song as healing but why I like it is that it simply documents the emotions as Kevin spits them out, like there might not even be a purpose to having shared them in the first place. They simply are.

‘Breathe Deeper’ disrupts Parker’s brooding with a synthesis of old and new. The familiar Tame Impala crunch of Currents returns, flowing and melding with those housey elements of Side A. This is my jam. The song hits me as a kind of spiritual link between Currents and the present. Having hit me in this way I know I’m going to enjoy Side A that little more the next time round.

‘Tomorrow’s Dust’ greets me with that guitar arpeggio. The one which I will jokingly say, has haunted the dreams of a large body of Tame Impala fans since the album’s teaser video. It’s not the ‘Hotel California‘ style ballad I imagined it would be, it is definitely its own thing. Within the song’s silken grooves, as with the other two songs of Side B, I feel the album come alive. Momentum builds. Was Side A was just Kevin clearing his throat before getting on with what he really had to say?

For me, the start of ‘On Track’ picks up where Lonerism’s ‘Sun’s Coming Up’ left off. It surfs along on a slightly more sophisticated Beach Boys vibration before blasting away from self-pity into triumph. I had my reservations about Parker taking on new styles on Side A but here I’m contradicting myself because he does it so effortlessly. Even if Kevin Parker doesn’t deliver Sgt. Pepper’s Lonely Hearts Club Band it’s worth hearing him shuffle through his back pockets for brilliant moments like these.  Strictly speaking, he’s on still on track.

‘On Track’ and ‘Lost In Yesterday’ hold few if any flaws. As serviceable of a pop song as it is, ‘Lost’ finds a greater depth nestled within the album. At first, I was worried that ‘Lost’ might be heralding in a creeping shallowness in Parker’s music. When I hear it here, I come to appreciate the sentiment. It’s another nice slice of Kevin Parker Philosophy. If it calls you? Embrace it. If it doesn’t? Sod off.

‘Is It True‘ is a giddy moment. Its euphoria starts bringing me around to the notion of Dance Impala. There is intriguing drum work sitting beneath each track, but it didn’t strike me until here.

“Something doesn’t feel right.” ‘It Might Be Time’ opens the album’s final side and bends into ‘Glimmer’. It’s Parker’s prog pop epic ‘One More Hour’ though that catches me by surprise. Like ‘Posthumous’ it carves out a series of deeper and deeper emotional confessions, tracing these contours until Kevin can’t help but blurt out his most guarded inner dialogues. Something about this direct transmission from the corners of one person’s mind to the center of another pulls at me. Kevin reveals to you everything he’s done and why he did it in the first place as his heart is laid bare. “I did it for love,” a terrifying confession.

How can something so conflicted sound like a triumph? “I did it for fame.” The raw emotional ache nailing his words to your chest. Cue guitars.  Passion. There’s a certain magnetism to Parker’s insane belief – in love, in himself, his relationship, in his music, in the fact he loves being alone as much as he hates it – that draws me in.

The closer fades out. Silence sets in. The emptiness feels different, uncomfortable. I reach for Side A and put it back on the turntable.

As it does my mind races. There were moments when The Slow Rush exploded with technicolor brilliance. There were others that left me cold. I think that Kevin Parker teeters on the edge, I don’t think that for all his confidence, Tame Impala‘s embracing of hip hop’s immediacy or the short and sweet nature of pop are as sure bets as the emotionally deep stoner aphorisms I and many other Tame Impala fans, have come to enjoy so much. So is Kevin Parker, in expanding his musical outlook as he has, turning his strengths towards his weaknesses?

“Why give it away?” I find myself asking myself.  “Because,” I answer myself, “I think, he can’t help himself.” Parker doesn’t take bold strides forward because he wants to but because he has to and as he does his songs bleed into albums and his albums into a bigger a story. One where some lonely guy from Perth (and now LA) takes you with him past the mires of isolation, out of the whirlwind of success and onto his wedding altar.

If I have to sum it up in a few sentences I will say this. For better and worse, The Slow Rush is an album of contrasts. Grandeur and depth nudge against a transient and mirage-like the sense of musical lightness. Kevin Parker’s ambition continues to release itself. As it does he walks a fine line between immortality and oblivion. Beneath the album’s smooth surface its music ripples with turmoil, destruction, and transcendence, and none sit as far apart a might be expected. As he is putting all this across, Parker lays down glorious and staggering emotional revelations.

‘Posthumous Forgiveness’ plays for a second time and I think to myself that nobody is making groundbreaking 7 minute pop songs in 2020. Nobody is making songs quite like Kevin Parker. The common thread across all of his work is that he pushes past rudimentary ideas of what music and lyrics should be and what other people expect. And in doing so he jumps toward something entirely own. Each Tame Impala album Kevin Parker tears up the rulebook and leaves it to his fans to catch up. Each time around the world is better for it.