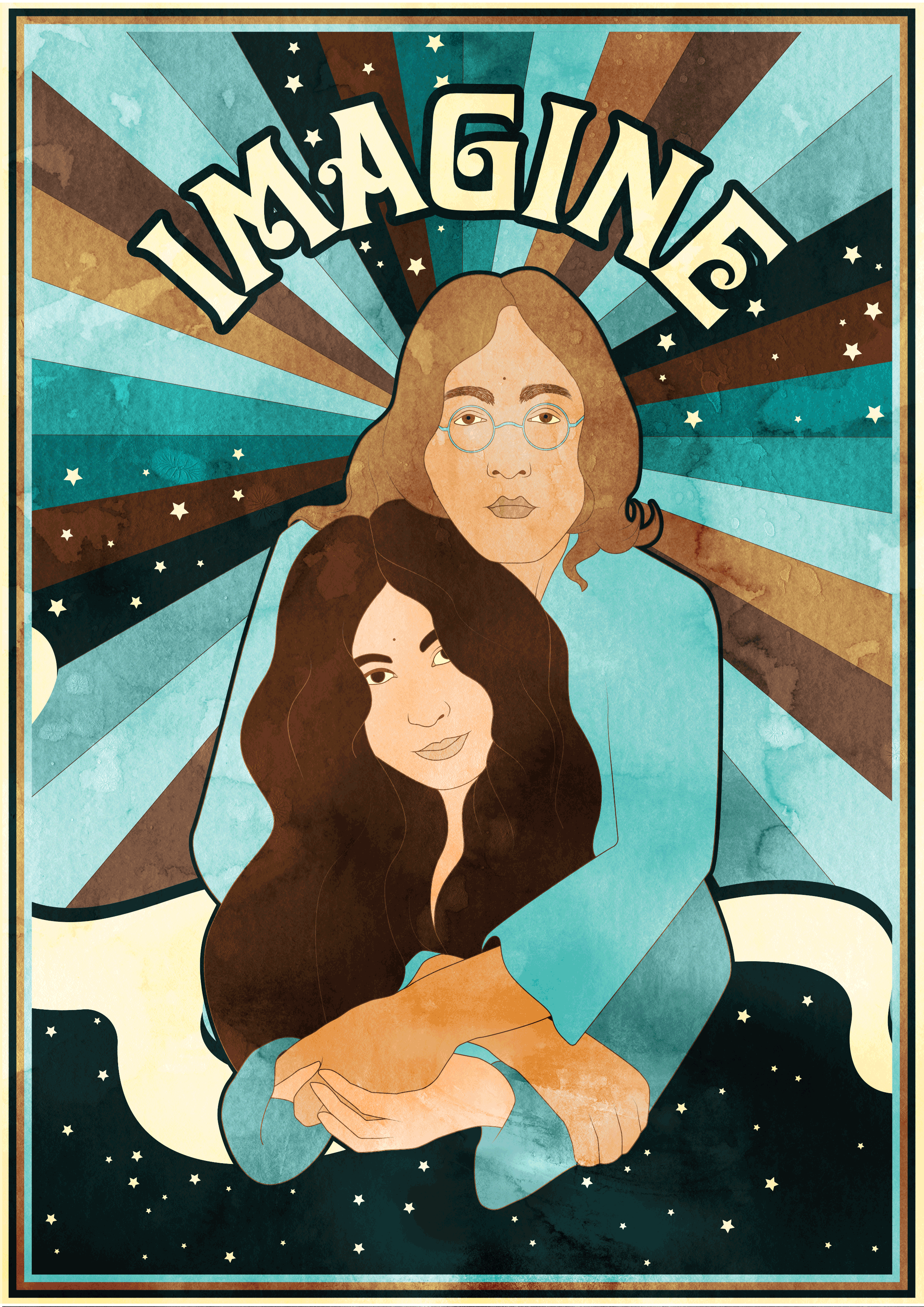 The song’s most potent moment comes first and it is stated with a shattering simplicity. Like the caustic ‘God’, sung an album before, John Lennon begins a list of all the hang-ups he’s let go of to get to here. But with ‘Imagine’ there’s a difference. Lennon turns his gaze outward, not so subtly suggesting that the listener must let go too.

It’s easy if you try.

Lennon demanded honesty above all else. He urged people to stand up and do something with their lives as he had. It may have been conceited but of all the musical artists who have asked such things in, few have spoken so directly.

No hell below us, above us only sky.

John’s conviction was that a world of peace and love, rather than one of pain and fear, could be created. Just as his determination had made the Beatles and guided them to fame, just as he had made himself a public figure, just as he had made himself the life he dreamed about as a boy (and upon finding that unsatisfying recreated it several times over) so to could this be done. It was only one nudge in perspective away.

Imagine all the people living for today.

Devastating in its brilliance, ‘Imagine’ was the high watermark of John Lennon’s peace crusade. After his political instincts led him into the troublesome territory of third album Some Time In New York City, he would mellow, retreating to safer themes of love, rock ‘n’ roll, and finally domestic fantasy. There’s a shade of Lennon that doesn’t extend past this song. Why that is, is hard to say. Perhaps he had finally tempered his youthful idealism and in doing so extended it as far as he could take it. Just as equally it may be his first step toward the peace of mind and spiritual comfort which eventually found him. As with so many of the trajectories of Lennon’s solo material and his work with Beatles before, his notoriously short attention span simply petered out. After Imagine, Lennon turned his restless energy to other things leaving the world to run with the possibilities he’d opened.

Imagine there’s no countries. It isn’t hard to do.

Like any good writer, Lennon spent years chiseling away, trying to find what it was he really believed in. There’s a saying that the greatest writing springs from words an author has spent no small amount of time trying to pin down and finally has. The lyrics of ‘Imagine’ feel like they had been sitting on the edge of Lennon’s thoughts a lifetime. Something that teased his mind for years, but only now was he able to bring them together.

Nothing to kill or die for. And no religion, too.

The songs of this period of Lennon’s work were costly to obtain. John had traveled through a succession short-lived spiritual awakenings and disillusioning life events to arrive at where he was. Fame had indulged many of the worst aspects of his personality. The violence, emotional and physical, he had inflicted frequently upon others and upon himself was significant. He was slowly coming to regret this past and beginning to let go of it.

Imagine all the people living life in peace.

‘Imagine’ exemplifies one of the many roles of an artist, the act of bringing people together, alerting them to the possibilities within themselves and casting a net toward the future. John doesn’t just sing about human potential, he states it openly, boldly and with meaning. He deeply and profoundly points to the fact that people should transcend themselves and search for a better world. Lennon stops short of clarifying just how it is listeners should go about it. For all of his revolutionary zeal John, as almost all artists before and after, offers a near unlimited imagination when articulating problems and considerably less when it comes to solutions. John sang about a utopia. But would a man like him, one so locked in ego and pain until close to the end of his short life, really have sat comfortably within it? Perhaps not. But does an artist ever matter that much once the song takes on a life of its own?

You may say that I’m a dreamer.

What is ‘Imagine’ but the absolute manifestation of the Sixties’ dream? There were many critical voices in the Seventies which could not accept it. The underground saw Lennon and Yoko Ono –notoriously uncredited in her contributions to ‘Imagine’ as with much of Lennon’s work – as sell-outs, people too famous and part of the establishment to be credibly be preaching what they were. The pair wrote from the position of privilege. It was easy to be an idealist with all that money.

But I’m not the only one.

Despite the criticisms leveled against them, John and Yoko bucked against the disillusionment of the new decade. Lennon felt the sixties’ momentum could be seized once more, that the world really could be turned upon its head. Lennon never gave up on that dream. He never bought into the idea that what had happened during the sixties was invalid. While he nor any others had brought about peace on earth or pulled apart the oppressive structures of capitalism and greed counterculture had so sought to desperately to displace, he still believed in peace and love as eternal.

I hope someday you’ll join us.

Flower Power had failed. Yet the reasons it built momentum in the first place were born of the very innermost human desires. Recognizing this, John was simply asking that wherever people were and whenever they heard this song, they open their minds, gather up the pieces of past failures and try again, to find love and to let it grow.

And the world will be as one.

‘Imagine’ is a forbidden fantasy and dirty secret. Beneath it all, deep within each and every person, is an inherent good, a wellspring of potential screaming to be let loose. All people hold some essential essence. If all of them were bought together, its capabilities would be endless.

Imagine no possessions. I wonder if you can.

Lennon’s gift was to write music. His songs hold the rare ability to float outside of the structures and the science of music. Technical aspects of musicianship fall aside as ‘Imagine’ moves from his mind and becomes part of life itself. It is something more than a beautiful song sung in a beautiful voice by a person suited to singing it.

No need for greed or hunger. A brotherhood of man.

‘Imagine’ and the album which bore its name was a vision John praised in its aftermath. He considered it the best he had ever done. For a time. Later he was critical. That was simply another part of his nature and outlook as an artist. The sequencing of the album itself seems to suggest this, it starts impassioned then lapses into bitterness, cynicism, and feelings of euphoric love often at odds with the sentiments of ‘Imagine’ itself.

Imagine all the people sharing all the world.

To Lennon technique was nothing and feeling was everything. The real impact of ‘Imagine’ sits beyond its words. It’s the feeling of ecstasy that comes with dreaming of a better life.

You may say that I’m a dreamer.

‘Imagine’ carried a sentiment more enduring and noble than Lennon was or ever could have been in life. Yet given that he imprinted his personality so heavily upon everything he did, it echoes him. Again, it’s not asking its listener to think but to do.

But I’m not the only one.

On ‘Strawberry Fields’ Lennon sang, “Living is easy with eyes closed, misunderstanding all you see.” ‘Imagine’ is a statement of possibility, what someone’s eyes might see if they opened them.  With ‘Julia’ Lennon told listeners, “When I cannot sing my heart, I can only speak my mind.” ‘Imagine’ is what is in his heart and on his mind, a bringing together of many of John’s elemental energies, his intellectual-Beatle bent, his idealism, and his raw intensity pooling into a singular vision. A prayer for peace, one no closer to becoming redundant than when he sang it.

I hope someday you’ll join us, and the world will live as one

It is human to blow the merits and achievements of the dead past any sensible proportion. Knowing this it is still difficult not to assert what is going to be said next. ‘Imagine’ was Lennon at his best.