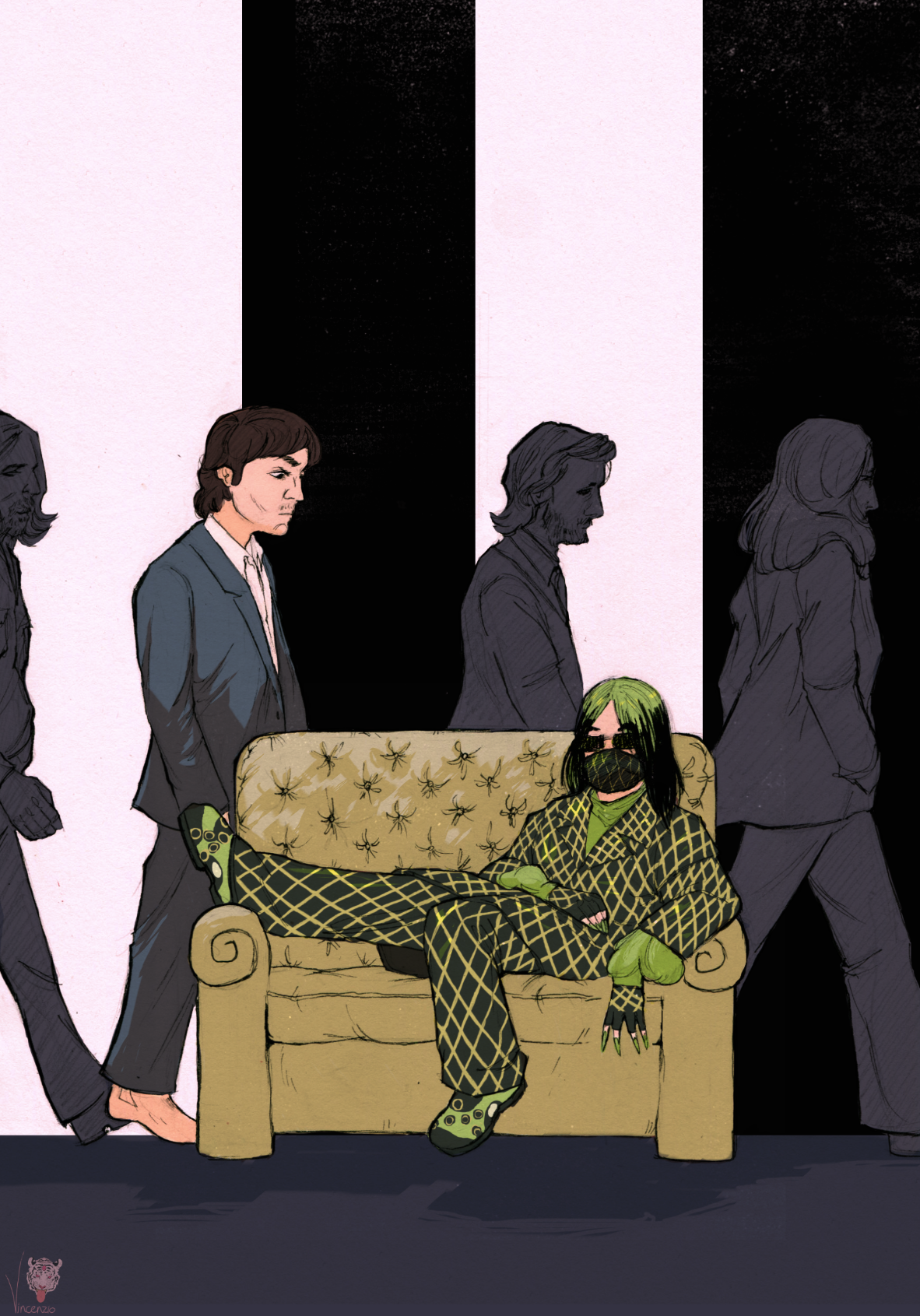 Billie Eilish stands onstage. “Yesterday, all my troubles seemed so far away,” she sings, eyes wrenched closely shut. A sulky voice wraps itself around every tortured syllable. Acid green hair frames her face, a baggy Chanel outfit cloaks her body. As she finishes making her way through a song that came to Paul McCartney in a dream more than 30 years before she was born the crowd erupts. ‘Yesterday’ is the Beatles’ most covered song. To date, it has been rerecorded more than three thousand times. But tonight? This is special. Eilish is living proof the Beatles have reached into the imaginations of another generation of fans.

When Billie Eilish arrived at the Oscars in February, she was already one the of biggest artists on the planet. One of the most listened to acts of 2019, her music has been streamed more than 4 billion times in the past year alone. Her significance, however, is greater than a sales statistic. In providing a new face, voice and aesthetic, one closer to the zeitgeist and playful nature of youth culture, Eilish has shifted the tone of popular music. As the first and only artist born in the 21st century to have a Number One album she represents a new generation, one whose views on fashion, climate change, sexuality and gender identity diverge from those of their parents. As her brother and record producer Finneas puts it: “Many pop stars kind of patronize — they’re like 25, talking to 15-year olds. [Billie] is the same age as a lot of the kids that are listening to her.”

As with the Beatles before her, Billie is a non-conformist, a pop entity that initially baffled an older generation but now is quickly winning them over. In addition to being one of the top streaming albums of 2019, her debut album When We Fall Asleep Where Do We Go? sold more than 676,000 copies. On January 26 it was nominated as Album of the Year at the 62nd Grammy Awards.

Billie Eilish Pirate Baird O’Connell was born on the 18th of December 2001. Even from the beginning her parents, actors Maggie Baird and Patrick O’Connell had plans for her. Billie was going to be a star. And Maggie and Pat weren’t about to leave anything to chance. Billie and her brother Finneas were home-schooled in Highland Park, Los Angeles. The curriculum wasn’t just reading, writing and arithmetic.  O’Connell and Baird were also musicians and it was from the Beatles’ songbook they taught.

“It was the Beatles who inspired them to begin writing their own songs,” Maggie shared with Variety in December last year.   “Because the class was for kids,” she continued, “I had to simplify it: Here’s ‘I Want to Hold Your Hand’, let’s give these pieces of the song a name. The class was just an hour a week for 10 weeks or so — but Finneas was like [mimes ‘Eureka!’ moment], and in a few months he formed a band. All I had to teach him was the basics, and he immediately got it — and the same with Billie.”

The Beatles connection stretches further back. Appearing on late-night television host James Corden’s popular Carpool Karaoke segment last December, Billie strummed ukulele while singing a snippet of the chorus to the Beatles’ ‘I Will’. The White Album number was the first song she ever learned. Eilish shared that she had been singing it since she was six.

Billie’s co-writer, producer, best friend, and brother Finneas shares his sister’s’ enthusiasm for the Fab Four. “The Beatles in all respects are my favourite artists ever,” he enthused to website Music All Access in 2016. “I would love to work with any of them. Or time travel and work with all of them.”

Finneas has also shed light on how Billie and he were first exposed to the Beatles. “Our dad would make these mix CDs,” he shared with Atwood Magazine in 2018. “Whenever we had to drive anywhere, we’d listen to mix CDs that were music that dad loved when he was growing up, and music that he’d just discovered. There was a really broad gamut of music that was current at the time, like a lot of Avril Lavigne, and then a lot of the Beatles.”

In a recent interview with radio DJ Howard Stern Paul McCartney revealed he and Billie had recently crossed paths. The connection came through the Beatle’s daughter and fashion designer Stella McCartney. “Stella FaceTimed me with Billie and her family,” Paul shared, “she wore some of Stella’s clothes on Glastonbury when she played it, so they were there. It was great to sort of chat with them.” Commanding the stage at Glastonbury Festival’s Pyramid Stage before a ravenous crowd last year, Billie Eilish appeared in a custom two-piece outfit plastered with Stella McCartney’s reimaginings of the Blue Meanies from 1968 Beatles film Yellow Submarine. Eilish is again collaborating with Stella McCartney for the release of a 2020 gender-inclusive capsule collection.

“I know that Billie is a huge, huge Beatles fan,” Stella shared with i-D last year. “The second time I met her she spoke of that real admiration for their songwriting, and I sense that when I listen to her work, and her brother’s writing. They have similar starting points [when it comes to] telling a story through the melody of music.”

Stella then acknowledged that the music itself may be different. “There’s obviously a modernity to Billie’s work,” she stated, “but I think that there’s a lot of beauty in the arrangements of her music, the harmonizing and the structure, that’s heavily influenced by The Beatles’ writing and work. [She has] a strong message of identity and staying true to yourself, never compromising. That’s something The Beatles did too.”

Billie Eilish and her brother learned about the Beatles from their parents. No doubt there were thousands of other artists passed down to them via their mother and father’s CD collections, yet the Beatles stuck. Why?

Perhaps it was the childlike lyrics of ‘Yellow Submarine’ and ‘Octopus Garden’ – John Lennon once shared the songs were purposefully given to Ringo Starr because he had just become a father and his simple vocals were evocative of the nursery rhymes. The Fab Four were well aware of their younger audience even in 1966, though just as equally the appeal could instead simply stem from the timeless quality of the Beatles’ work. As Paul McCartney himself once stated, “You can’t put an age limit on good music.”

Eilish, alongside millions of others her age, is proof that there is something going on. Streaming statistics released by Spotify in 2019 show 30% of those streaming the Beatles are aged 18 to 24. 20.6 million of Spotify’s monthly users, close to 10 percent of the streaming platform’s overall 220 million users, were listening to the Beatles.

This cross-generational appeal is big business. Abbey Road the Beatles 11th studio album, was the highest-selling album in terms of physical sales. (Billie Eilish’s own album trailed second.) In terms of overall listening, the Beatles’ 11th album came in at number 10.

Something is going in. While what that something is may be hard to put a label on what can be said without question is that the Fab Four are again a fascination for another generation of fans. Despite having parted ways in 1969 and not having played a live concert since 1966, the Beatles continue to act as the center of popular music’s gravity. As it was in the 1960s, there are still teenagers playing the Beatles’ in their bedrooms. Only now some of those teens are turning those bedrooms into Grammy Award winning studios.