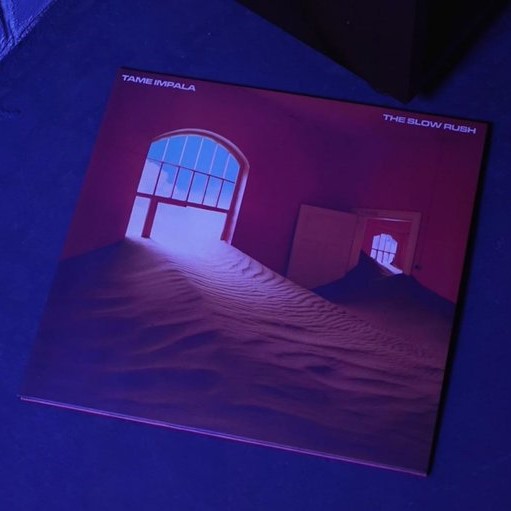 The Slow Rush In An Imaginary Place has Tame Impala fans confused. Where is this imaginary setting they are supposed to be hearing it from? Is it a crowded concert hall? A warehouse? The same street Daft Punk’s dog-man Charles walks down in the music video for ‘Tha Funk’? The bathroom at a party?  The answer is in the title. Nowhere.

Tame Impala has never been bound by realism. The span of Kevin Parker’s work, from his early singles to The Slow Rush, sits closer to musical fantasy than to replication of live performance. The Slow Rush In An Imaginary Place turns this idea on its head, transforming the dreamscape of a Tame Impala album into a live concert. Even then, it is less about weaving the illusion of a concert than evoking the feeling of missing one. It conveys the jarring feeling of being disconnected. In doing so it reminds the world they are unified in that loss.

From ‘One More Year’ to ‘One More Hour’ the mixes’ songs arrive surrounded by chatter and ambient sounds. Drums are drowned in echo, guitars screech. Parker creates an atmosphere pushing on real but never quite getting there.  A good studio album is, after all, always better than a live recording. To make The Slow Rush sounds real Parker has to murder it with squeaks, squeals, muffles, echoes and fumbled feedback.  He perverts the essence of his perfectionism and bootlegs himself.

When the Beatles stopped touring in 1966, they changed the world. Focusing on making albums they realized they were no longer bound to creating what they could perform live. Born decades after the Fab Four broke apart, Kevin Parker grew up with the received knowledge that an album never had to sound like a band in the first place. He was, after all, started recording music at age 12, years before playing in a band.

Parker’s trippy mix is equal part statement about and diversion from isolation. The Slow Rush dealt with the transience of humankind. Take the cover of the album. A room swallowed up by sand, a reminder that humanity can disappear in an instant, enveloped indifferently by nature from which it sprang.  Imaginary documents the feeling of another sudden turn.

The music of this mix, like Tame Impala itself, been pushed aside by the chaos of society at large.  In creating the unreality of a live performance, Parker makes a surreal comment on something we didn’t know we had until it wasn’t there.  The Slow Rush In An Imaginary Place is not so much about creating a live experience as conveying the feeling of missing it.  It triggers the emotion of loss. It’s going to be a long time before anyone listening to this mix is going to hear another crowd.