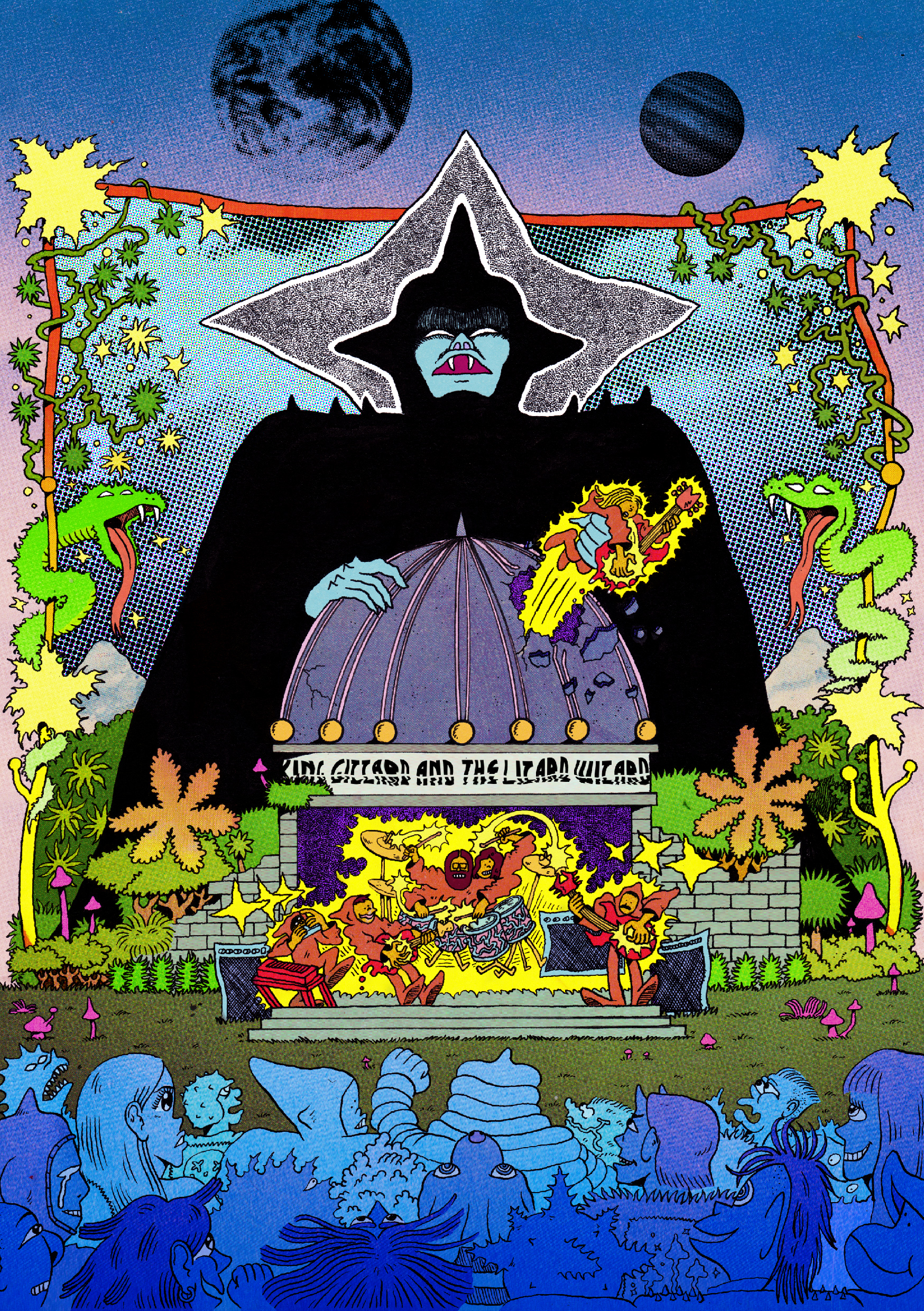 Once a heartland of British industrialization, Leeds today is a student city, one with strong roots in indie rock. King Gizzard & The Lizard Wizard, to this city’s armada of Alex Turner idolizing masses, is something exotic. The band are often met with a curious skepticism.

But beneath cold-faced stances like these, Leeds is, in truth, endlessly receptive to anything new and creative. And in this respect, King Gizzard have few if any peers. The band’s output is prolific, their genre everchanging. When it comes to their capacity to surprise, they never miss a beat.

I’m lucky enough to be seeing them tonight. But not quite yet. First, is the matter of the supporting acts.

Stonefield are first on the bill and they rock, hard. They may be Gizzard’s openers, but they’re seasoned players. The all-sister outfit dropped their first record back in 2013 and have been friends with Gizz since the early days. Dropping a drumstick mid-song, drummer and vocalist Amy Findlay doesn’t so much as bat an eyelid. She recovers it effortlessly and keeps on bashing.

Orb come next. They pave the way for King Gizzard with a powerful knock-the-bubbles-out-of-your-beer sound. Channeling early Sabbath, they project a tremendous amount of energy.

Then Gizz arrive. Slowly at first, one or two appearances by Joey Walker and Eric Moore as they make the final touches to the musical setup. “I’m just waiting for any excuse at this point!” a man in front of me exclaims in a thick Yorkshire accent. At this point, I am too. I feel like Gizzard could open with the acoustic ‘Sense’ and still drive this audience mad.

Instead, they ratchet things up with something heavier. ‘Mars For The Rich’ flings the floodgates open. As the songs plays the crowd erupts into a barrage of beer and moshing.

The band plays with raw intensity. The audience pulsates. Many drive forward, fervently falling upon one of any number of circle pits. It feels like every person present is being drawn into the camaraderie the music creates.

As mosh pit madness unites the room, the audience becomes a singular moving mass. Dozens crowd surf across this sweaty mob. Most are dragged to the floor by bouncers, others escape. By the end of ‘Mars’ everyone is drenched in beer, sweat, and, if they’re lucky, a sprinkling of water from Stu Mackenzie.

On Gizz plow. As they do the room reverberates with every shift in tempo and genre-bending musical turn. With Gizzard there are many and each is taken flawlessly with a confident panache.

I look at the crowd around me. For a city still so seemingly hooked on early-2000s rock, tonight Leeds has turned out an alliance of metalheads, stoners, and environmentalists in addition to its usual indie contingent. Despite their differences, every single one of them shows cultish devotion to the endlessly diverse, and often conceptually challenging music Gizzard presents them. Though spread through schools, universities, workplaces and coffee shops, everyone here is united in their connection to these seven musicians from Melbourne who have arrived in drizzly Leeds to play their songs. The band is here, and this town is grateful.

Gizzard’s last two albums, Fishing for Fishies and Infest The Rats’ Nest have been highly environmentally conscious. The band delivered a vegetarian-vegan bop in ‘Fishing for Fishies’ then ventured into left-leaning activism with ‘Mars For The Rich’. These messages don’t go unheard by the fans here tonight. Many in Leeds have been participating in climate rallies, more than a few sporting banners with Gizzard lyrics “There is no Planet B”, the ‘Cyboogie’ fish face and the Nonagon Infinity symbol. Others have gone further and tattooed these images to their bodies.

Tonight, the band returns the favor, throwing out what feels like as large as a portion of their back catalog as can humanly fit within their headline set. From what I’ve witnessed there isn’t a single song that isn’t met with absolute appreciation.

And then it ends. Leaving the gig is an experience within itself. As a flood of disheveled masses exits the venue, chants and singalongs erupt. Nobody here wants this camaraderie to end. Eventually, though, it does and I along these many others dissipate into the city on a cool October night.