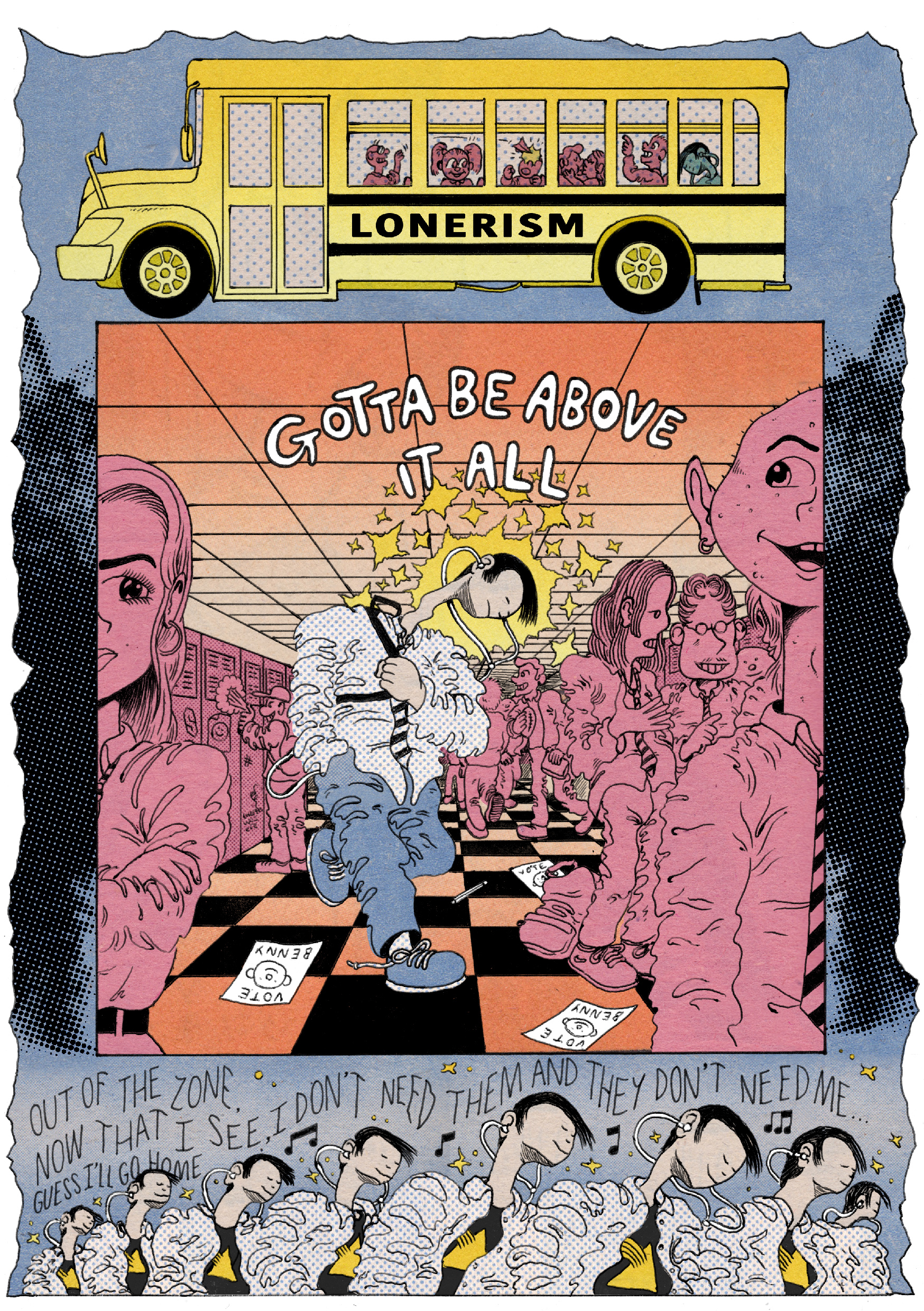 Being a loner is never easy. It’s isolating, frustrating and debilitating. Being one in high school even harder. It’s a time when adults, movies, and television inform you that you’re living the golden years of life. In truth, you spend most of the time blocking it out with headphones on.

I was an anxious 16-year-old. Social interaction was grueling, a challenge. Music was the perfect alternative. When I put an album on, I could get lost in a world of blissful solitude. It was easy to press play on an iPod and feel the universe disappear.

Plenty of albums helped me in this way throughout my teenage years. But the one which resonated the most was Tame Impala’s Lonerism. To a teen, the title alone was enticing. The words spoke to that juvenile feeling that the world was somehow simultaneously against you and at your fingertips.

In 2012, Lonerism’s singles were inescapable. They magnetized listeners with a sound that dripped with psychedelia. Every self-fashioned hipster at my school was all too eager to express their love for the guitar solo on ‘Elephant’ or discuss the catchy chorus of ‘Feels Like We Only Go Backwards’. Despite the approval from those around me, when Lonerism played through my iPod’s headphones I connected to Kevin Parker’s lyrics in a way that was all my own. His songs were personally and profoundly potent, I was hearing music in a way I never had before.

Teenagers always feel as if their voices are unheard. This is only amplified at school. Being one voice amongst thousands can be incredibly unmotivating. At the time I discovered Lonerism, I felt like a dysfunctional cog in an enormous clockwork of other cogs. When a long day of school was coming up, the anxious anticipation of sitting on a bus not knowing what the day would offer made every morning unbearable.

Then the opening words of ‘Be Above It’ would play in my ears. Its mantra felt so inspiring. The repetition of “gotta be above it” on infinite loop made me feel like I was scribbling the phrase onto a chalkboard inside my head. Although I have since come to learn Kevin Parker wrote the song about being an adult in an adult world, the fact that its lyrics were telling my 16-year-old brain I had to be above what goes on in life, to be strong, to be indifferent and to be unaffected, meant the world to me. Once the three-minute track was over, noises of stress and pressure evaporated. At this point, I would turn the iPod’s shuffle function off and let the album soundtrack the rest of my day at school.

The other pressures that high school brought didn’t make life easier for an apprehensive teen like me. Homework, friendships and extra-curricular activities were common obstacles but all paled in comparison to love and would-be relationships. Crushes sucked, and still do. The scope of life when in high school is so minuscule even the tiniest one seemed like the biggest thing imaginable.

And this was when Kevin Parker felt like a friendly therapist. Learning that he too dealt with love in the same way I did was a revelation. ‘Keep On Lying’ was one of the most exposed and vulnerable songs on Lonerism and I connected with it for that very reason. Here Kevin wasn’t dancing around metaphor or analogy. He was telling it as it was. And this was exactly what I needed to hear.

When Kevin sings that he will tell his lover the truth at the “end of the song” and then goes on to perform ‘Keep On Lying’ in a way that feels like it’s never-ending struck me as a blow of genius. I was that person. I was the kind of person who tried to create a persona whenever I had a crush so the themes of lying and deceit resonated with me immensely. Of course, I never did anything about it, but the music acted as a perfect echo chamber. It was a relief to hear that I was not alone.

When you are 16, you barely know anything about music, but you can learn as you go along. Most people my age in 2012 didn’t know much about psychedelic rock from the ‘60s or ‘70s and I knew even less than them. I didn’t know Jimi Hendrix. I had heard of the Beatles but didn’t know too much more. I had a t-shirt with the cover of Pink Floyd’s Dark Side of the Moon on it but had no idea what it really meant.

A timeline of Lonerism’s musical influences could go back decades. Yet to me, it all seemed locked in a single moment of time. Years of different tones, soundscapes and effects are contained within the album. 16-year old me didn’t know it, but I was getting a history lesson as well. Something as simple as Kevin Parker’s voice sounding a little like John Lennon’s was a gateway into a whole new world of music. Lonerism pointed to hours and days of new music to discover and listen to. This, in turn, offered me hours and days of refuge from the outside world.

‘Endors Toi’ and ‘Mind Mischief’ sounded nothing like anything I had ever heard. Layers and layers of music were intertwining in such beautiful ways. I was unable to believe these recordings were all one person. Lyrics like “whoop-sie-daisy, I thought I was happy” from ‘Why Won’t They Talk To Me?’ or the blunt premise of ‘Nothing That Has Happened So Far Has Been Anything That We Could Control’, were aspects of angst I had only heard from emo bands, introspective singer-songwriters, and folk musicians. While I was familiar with sentiments like these but in pairing them with mind-altering walls of sound Kevin Parker somehow made them far more real.

Lonerism made me less alone. And although I now feel it untrue, when I was 16, I felt that this record was one of the only things in life that ‘got me’. There is one song in particular that I have never let go of and that is ‘Music To Walk Home By’. It encapsulated everything I needed from Lonerism in one grand statement. It taught me to be unaffected by the pressure to be somebody else, it made me rethink how to approach relationships and, it is a perfect psychedelic soundscape which takes decades of past inspiration and swells into a 5-minute epic. It was music I could walk home to. After a long day of school and it made everything alright.

As an adult, I feel less of a need for music which affects me in this way. But having an album like Lonerism hit me at that time in my life, as the person I was then, was astronomically important. Lonerism still lives on inside of me seven years later. Like so many of those albums we hold near and dear, Lonerism was one which was there for me when I needed it most.